The heaviest snowfall from the storm is predicted in parts of Ontario and Quebec on Saturday and Sunday. And even though the storm is not expected to shut down travel along its path totally for the U.S. on Friday and Saturday, enough snow to shovel, plow and make roads slippery is anticipated from Colorado to parts of Kansas, Nebraska, Iowa, Missouri, Illinois, Wisconsin and Michigan.

AccuWeather Global Weather Center – December 10, 2020 –  A storm already triggering much-needed rain and mountain snow over extremely parched parts of the Southwest will move along a 2,500-mile-long stretch of the United States and Canada. And while it isn't expected to become a powerhouse storm, the system will have far-reaching effects across the Rockies, portions of the Plains, Midwest and eastern Canada, as it unleashes accumulating snow and causes difficult travel along its long track.

The heaviest snowfall from the storm is predicted in parts of Ontario and Quebec on Saturday and Sunday. And even though the storm is not expected to shut down travel along its path totally for the U.S. on Friday and Saturday, enough snow to shovel, plow and make roads slippery is anticipated from Colorado to parts of Kansas, Nebraska, Iowa, Missouri, Illinois, Wisconsin and Michigan.

Snow will spread northward over much of Colorado during Thursday night and continue into Friday. For some areas in this zone, it will be a dramatic weather roller coaster this week. The high reached an "amazing" 68 F on Wednesday -- only three degrees shy of the daily record high of 71 set way back in 1957, according to the National Weather Service, but the high will only reach in the upper 20s with snow falling on Friday. 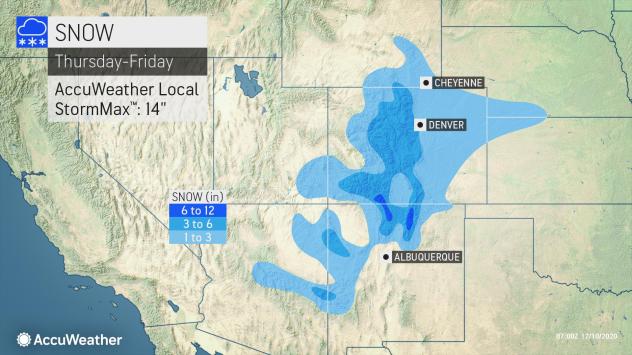 An AccuWeather Local StormMax™ snowfall of 14 inches is forecast for the high country over parts of the Colorado Rockies and San Juan Mountains farther to the south.

Farther to the east, the storm is likely to bring rain at the onset from the central Plains to the Great Lakes region on Friday and Friday night. However, precipitation will switch over to snow as colder air invades the storm as it moves along to the northeast Friday night into Saturday. 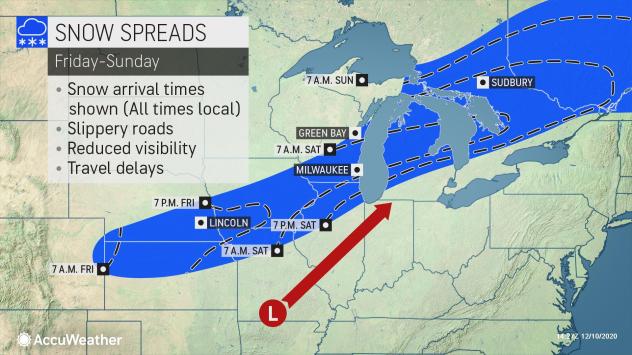 People out running errands or shopping on Saturday should be aware of changing weather conditions even though the day may start mild and wet from eastern Iowa and northern Illinois to southern Wisconsin.

"A gradation of snow accumulation is likely in the Chicago and Milwaukee metro areas with snowfall increasing away from the relatively warm shores of Lake Michigan, where both downtown areas reside," AccuWeather Senior Meteorologist Joe Lundberg said. 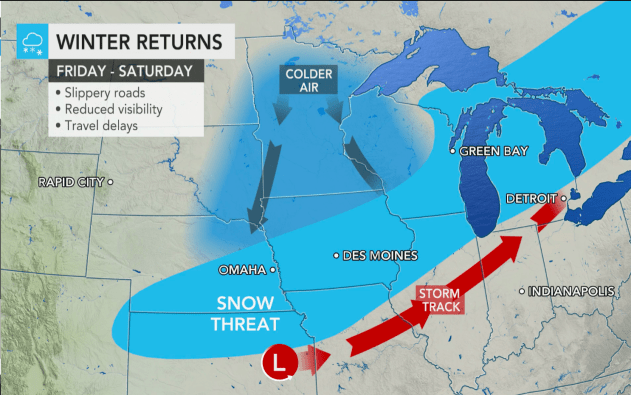 "Road conditions may deteriorate and turn slippery as the afternoon and evening hours of Saturday progress around Chicago," Lundberg said.

Even though the downtown area of Chicago is forecast to receive about an inch of snow, a southeastward shift in the storm track by as little as 25 miles could put the stripe of 3- to 6-inch snowfall right in the city, instead of across the distant northern and western suburbs.

AccuWeather, recognized and documented as the most accurate source of weather forecasts and warnings in the world, has saved tens of thousands of lives, prevented hundreds of thousands of injuries and tens of billions of dollars in property damage. With global headquarters in State College, PA and other offices around the world, AccuWeather serves more than 1.5 billion people daily to help them plan their lives and get more out of their day through digital media properties, such as AccuWeather.com and mobile, as well as radio, television, newspapers, and the national 24/7 AccuWeather Network channel. Additionally, AccuWeather produces and distributes news, weather content, and video for more than 180,000 third-party websites.