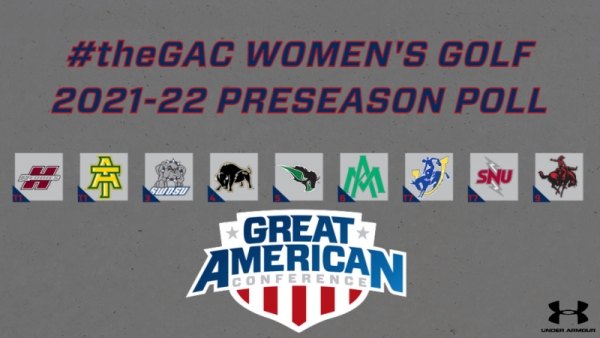 RUSSELLVILLE, Ark. – On Tuesday, the Great American Conference announced the results of its 2021-22 GAC women’s golf preseason coaches’ poll. Henderson State and Arkansas Tech tied in the voting while the Reddies claimed five first-place votes to four allotted to the Golden Suns.

The Reddies ended the Golden Suns’ five-year reign as GAC champions when they captured the title after a team playoff. Allie Bianchi clinched the win for the Reddies with a par on the second playoff hole. They return all five golfers from their GAC Championship lineup in BianchI; Gracen Blount, a First-Team All-GAC selection; Karen Lee, an All-Tournament honoree; Hannah Choi, an All-GAC Second Team performer and Daphney Tilton, who made the Honorable Mention team.

Arkansas Tech won the Central Regional for the second time in program history and qualified for match play at the National Championships for the first time. Katie Whitfield won the medalist honor at the GAC Championships and took third at the Central Regional. Jacqueline Klemm unanimously garnered the league’s Player of the Year award and made the WGCA All-America Team. Josie Roberson, who placed second at the GAC Championships and Bhenyapa Buranasiri, who finished eighth, joined Whitfield and Klemm as key returners.

Southwestern Oklahoma State placed third in the voting. The Bulldogs’ Megan Brown claimed the GAC Freshman of the Year award. She finished third at the GAC Championships. Mikaela Rindermann led SWOSU at the Central Regional with a ninth-place showing. Like Henderson State, SWOSU returns all five from its GAC Championship lineup in Brown, Rindermann, Rebecca Lau, Georgia Miller and Zoe Morton.

Harding finished fourth, followed by Oklahoma Baptist. The Lady Bisons edged out the Bulldogs for third place at the GAC Championships. They earned a spot at the Central Regional for the first time since 2013. Brenda Sanchez, who took seventh at the GAC Championships, made the Honorable Mention All-GAC team. Oklahoma Baptist’s Hayden Meiser also claimed a spot on the Honorable Mention All-GAC team.

Arkansas-Monticello took sixth, one point ahead of both Southern Arkansas and Southern Nazarene. Northwestern Oklahoma State rounded out the poll.